Commands to teach your dog 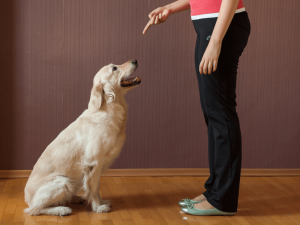 Ok, this one isn’t exactly new, but it is the foundation of basic obedience training which your dog will need in order to progress!

By always asking your dog to ‘sit’ before crossing a road, will ensure they pause rather than stepping straight out into passing traffic; and even they don’t have a great stay or recall, a well-established and ingrained sit can drop him on the spot in an emergency.

How to teach your dog to sit

Hold your dog’s favourite tasty treat in your hand just in front of their nose and allow them to smell it but not eat it. Slowly bring the treat up and back over his head; as his nose comes up following the treat, his back end will lower until he’s sitting.

Once he’s sitting, praise and reward him. Practise at every opportunity – not just during training sessions, but asking him to ‘Sit’ before having his collar and lead put on, or before getting his dinner (which then also becomes the reward).

As he gets the idea, phase out holding a treat in your hand (but not the praise and reward), and gradually begin to make your hand signal more subtle. Attach a verbal command, and practise both so he’ll respond promptly to either a gesture or your voice. 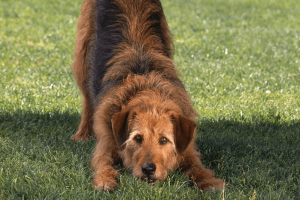 While your dog is standing facing you, take a small treat in one hand and place it right in front of his nose. Very slowly lower the treat towards the ground just between his front paws; as his nose follows it, his front end will go downwards while his back end stays in the air, making it look as though he’s taking a bow.

Praise and reward him. Gradually increase the time he stays in the bow, and also begin moving your hand less, but continue to bend forwards – this becomes your cue, but to anyone watching it will look as though you’re politely bowing to each other. 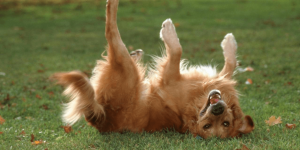 Ask your dog to lie down, and then use a treat to lure him into lying on his side by placing it just in front of his nose and bringing it slowly round towards his shoulder.

When he’s comfortable about doing this, bring your hand round a bit further towards his spine, and as his nose follows the treat take it a bit further still until he rolls right over.

Once he’s confident with rolling over you can attach a cue word just before he goes over so he begins to associate it with the action. 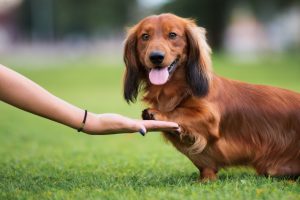 If you want to go a step further, you can teach your dog to shake. Do this by holding their paw there for a longer time before letting it go and giving your dog their treat. 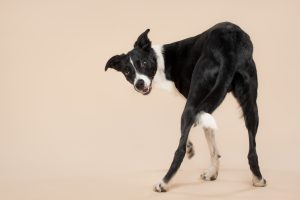 Start off by holding a treat in front of your dog and making them do a full circle before giving them the treat. Once they can easily do one full circle lured with the dog treat, try building it up to two. If your dog can do two circles lured with their treats, they are getting a handle on this trick. At this point you can transfer the treats into your other hand and lure your dog to do a spin with your empty hand and rewarding them with the other.

Once your dog is comfortable with spinning you can attach a verbal cue to say before guiding them through the trick. The more you do it, the more comfortable they will get with their tricks and the better they will be.

Always make your dog spin in the same direction as this will help them remember the trick. Spinning in two different directions are two different tricks. 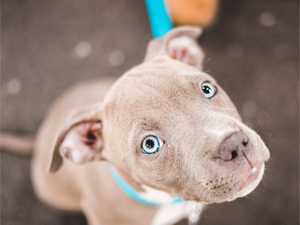 While puppies are growing they should not go for long walks or over exercise. Have a look at what you need to know about walking your puppy.
Read more > 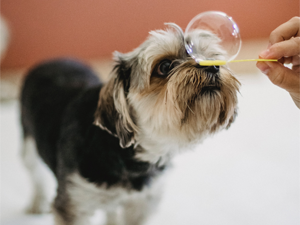 We all know the importance of exercise for our pets but are they getting enough mental exercise? Read our tips to exercise your pets mind.
Read more > 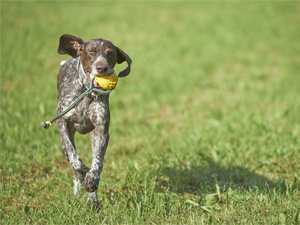 We all know that exercise is important but too much of a good thing can be dangerous to our pets. Have a look at how to protect your pets.
Read more >
Menu
Share via
Facebook
Twitter
LinkedIn
Mix
Email
Print
Copy Link
Powered by Social Snap
Copy link
CopyCopied
Powered by Social Snap
To help you get the best experience from our site and to tailor, measure and validate ads, campaigns and offers we use cookies. By clicking on or navigating the site you agree to allow us to collect information through the use of cookies. Find out more about how we use cookies in our privacy policy.
Close